In the first part of this series, growing strawberries, I decided what containers to grow them in and what compost I would use. Once they arrived I wrote a follow-up about planting the plants.

In this third part, it is now 7 days after delivery (6 days after planting) and it is time, I think, for an update. 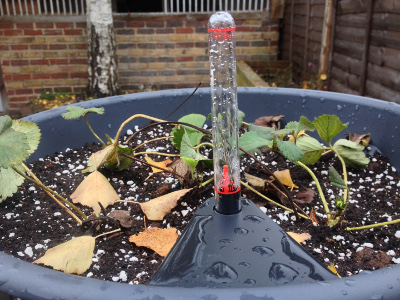 Other than the initial watering, I haven't watered the plants. Every few days I have been sticking a finger in the soil of each container to check it is moist.

As can be seen from this first image, the water level in the top planter has, thanks to the rain, risen a fair amount above the minimum line.

Although the amount of rain has been surplus to the plants' current needs, the soil isn't water-logged—there is sufficient drainage.

With bare root strawberries bought in the autumn, they need to put on some growth so they can photosynthesise and put energy into creating a strong root system. 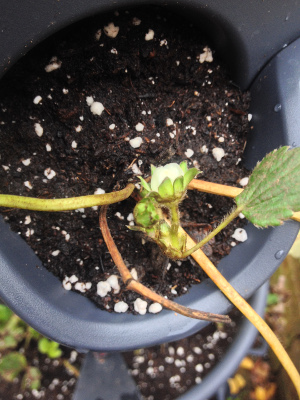 If they don't put on enough root growth by the time the temperatures really drop they might not survive the winter.

Luckily it hasn't gotten cold yet and according to my Gnome weather panel the lowest temperature it is expected to be in the next 10 days is 6.1° Celsius (not too cold for the plants).

While not a complete surprise, two of the plants have put out some flowers—3 in total.

While I should really cut them off in the 1st year of growth (i.e. 2015) I saw a bumblebee when I was planting them last week so decided to let them flower rather than let that nectar go to waste.

Overall, I am happy with the decisions I made in the planters, compost, and plants.

Of the 36 I bought (37 received) I thought some of the ones in the top planter were so small (one of them had only two leaves and tiny roots) I didn't think many of them would survive. 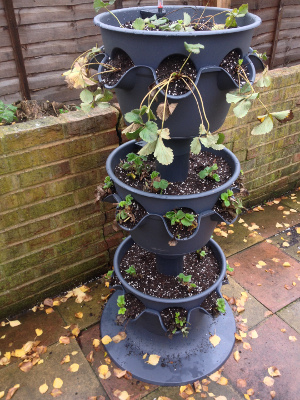 There isn't that much maintenance that needs doing for the plants at the moment.

That is it. After planting in autumn strawberries don't need that much attention until the following year.

Runners and flowers could be removed this year (2015) if any are produced, and that may result in stronger growth next year. I won't be doing that, however.

A final thought on old leaves. You'll notice that I haven't removed any leaves from the plants since I received them, including the leaves with damaged stems in the top planter. The reason for this is quite simple: more stress will probably be bad for them.

You're supposed to remove old leaves after fruiting has finished for the cultivars in the middle and bottom planter, and only remove last season's (2014's) leaves from the cultivar in the top planter—ever-bearers need their leaves to get enough energy from the sun to produce new leaves before winter.

While damaged leaves are a way for infection and disease to enter the plant, I'm going to give them at least a few weeks to settle in before I start removing dead leaves. Gravity should take care of them sooner or later anyway.

Container-grown strawberries are more susceptible to cold weather than those grown in the ground, but in South-East England (geographically) the winters aren't usually that harsh. 0° Celsius outside temperatures is when I'll probably start doing some more research on the matter, but at a glance they are cold-hardy and can easily survive at −4° Celsius.